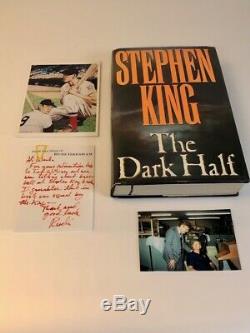 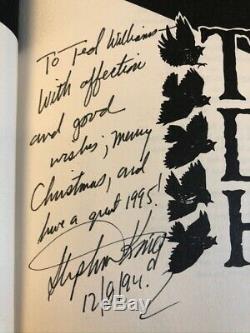 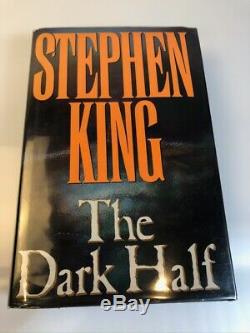 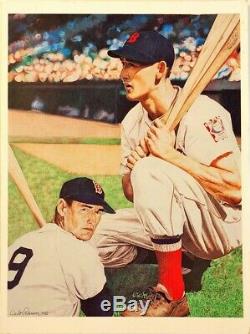 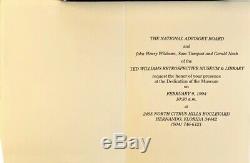 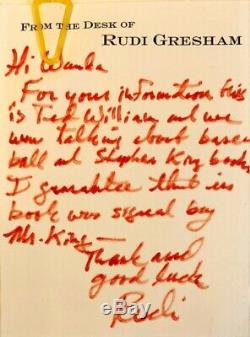 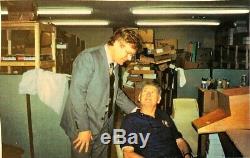 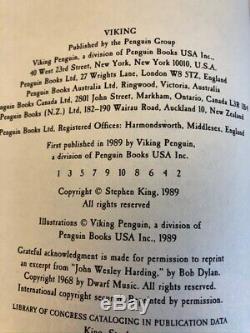 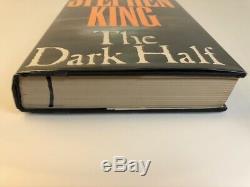 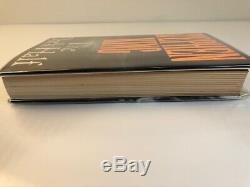 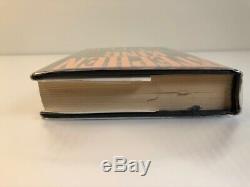 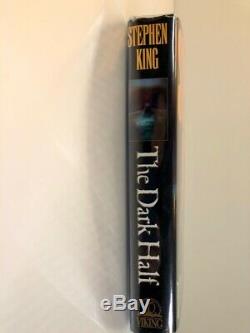 A one-of-kind opportunity for an exquisite item that intersects a signed Stephen King novel, his love for the Boston Red Sox, an item owned by Red Sox great Ted Williams, and his love for Stephen King's works. All of this brokered by a famous, and controversial person. The lot consists of 4 items, 3 of them were stored in the pages of the book by Williams.

First Edition, First Printing The Dark Half signed by Stephen King for Ted Williams. An invitation to the Ted Williams Retrospective Museum & Library event on Feb 9, 1994. A handwritten note from The Honorable Rudi Gresham describing a discussion (about baseball and Stephen King) with Williams and attesting to the authenticity of Stephen King's autograph.

A photo of Gresham with Williams during that discussion. The Dark Half is a 1st Edition, 1st Printing. To Ted Williams with affection and good wishes; Merry Christmas and have a good 1995! I suspect (but cannot confirm) it came from King, who is a Boston Red Sox fanatic. Perhaps it's an author's copy that he supplied or a remainder (black line across pages at bottom). Invitation to the Ted Williams Retrospective Museum & Library event on Feb 9, 1994. The front shows two poses for Ted Williams: Williams on deck and Williams at bat. Hi Wanda, For your information this is Ted Williams and we were talking about baseball and Stephen King books. I guarantee that the book was signed by Mr. Thanks and good luck, Rudi. Rudi Gresham is well-known in both Veterans' Affairs and the entertainment industry. For decades, he brokered visits by entertainment and sports figures to active military and wounded warriors. Of late, his otherwise-spotless reputation has been mired in questions about his own military service. Photo of Ted Williams and Rudi Gresham. The item "The Dark Half by Stephen King autographed to Red Sox great Ted Williams 4 Items" is in sale since Thursday, January 2, 2020. This item is in the category "Books\Fiction & Literature". The seller is "teminkino0" and is located in Huntsville, Alabama.