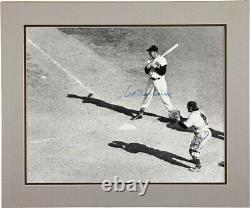 Make an Offer Today and Get a Quick Response! Take a Look at This Week's Specials! TED WILLIAMS - AUTOGRAPHED SIGNED PHOTOGRAPH CO-SIGNED BY: YOGI BERRA - HFSID 283050. TED "THE SPLENDID SPLINTER" WILLIAMS and YOGI BERRA. This 19x15 black and white photo, sure to warm the hearts of Red Sox fans, features the Yankee Hall of Famer catching an intentional walk against the Boston Red Sox Hall of Fame outfielder.

Signed by both players and matted to 24x19¾ in a black-and-grey matte. This photo was taken during a game between perennial rivals the New York Yankees and the Boston Red Sox, with Hall of Famer Yogi Berra backstopping against fellow Hall of Famer Ted Williams. Berra is standing well outside the strike zone and, even though the ball is shown only feet from the plate, Williams hasn't started his swing.

Hall of Famer TED WILLIAMS. He was the last to hit over. 406 in 1941, leading the American League in hitting six times. His lifetime batting average is. 344 with 521 home runs.

A fine defensive catcher and handler of pitchers. Born Lawrence Peter Berra in St. Was also a feared slugger and clutch hitter who. Though famous for swinging at bad pitches, Yogi seldom struck out.

He played in a record 14 World Series - on the winning team a record 10 times - and made every All-Star team from 1948 to 1962. As manager of the Yankees and later the Mets, Berra is. Only three Major League managers. (along with Joe McCarthy and Sparky Anderson).

To win pennants in both leagues. Hall of Fame in 1972. Famous for enriching the language. With puzzling expressions like "Ninety percent of this game is half mental", "Nobody goes there anymore; it's too crowded", and It's déjà vu all over again. Matte is lightly creased in corners. Matte is not in Gallery of History style. Items were not evaluated outside matte. See more material from these signers. See more listings in our SPORTS (2,365). Please note that this is an authentically signed item.

We do not sell autograph copies or signature reprints. Images shown may contain our company watermark. The actual document does not contain this watermark.

This item has been authenticated and is accompanied by a Certificate of Authenticity issued by our parent company, Gallery of History, Inc. We financially stand behind our COA. Ask us about our PSA/DNA and JSA authentication guarantee.

Our Third & Best Handbook - The One You Want On Historical Documents! For the experienced and novice collector and for those who just love learning history this beautiful 253-page hardcover volume is for you! Take a look at over.

Other listings in these categories. And This Week's Specials. Gallery of History is the world's largest dealer of authentic autographs and manuscripts. Our inventory contains documents in all areas of interest including presidents, royalty, military, aviation, religion, business, science, celebrities, sports, music, authors and more.

Whether looking to add to your collection, acquire a unique centerpiece for the home or office, or as a truly one-of-a-kind gift for someone special, you'll find it here at HistoryForSale. Founded in 1981, is a long-standing UACC Registered Dealer, #RD110, and is a long-standing member of the Manuscript Society. The Gallery of History is the largest dealer in the world with an available inventory that exceeds 230,000 rare autographs and manuscripts.

Preserving historical documents is important to us. Our unframed items are sent to you either in acid-free archival sleeves or have been encapsulated when noted.

The majority of our in-house framed items are encapsulated in acid free sleeves to guard against organic acids, mounted in an acid-free enviroment and are framed behind glass or UF3-AR Plexiglas which blocks out most ultraviolet light. We warrant to the original purchaser for a period of ten (10) years from the date of the sale the authenticity of any autograph offered by HistoryForSale. Gallery of History is not liable for any other damages, including consequential damages. There are no other warranties of any nature either expressed or implied, including but not limited to the warranties of merchantability and fitness for a particular purpose. This item is in the category "Sports Mem, Cards & Fan Shop\Autographs-Original\Baseball-MLB\Photos". The seller is "historydirect" and is located in this country: US. This item can be shipped worldwide.