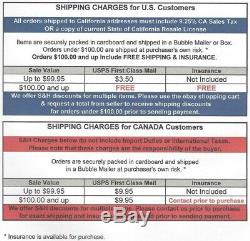 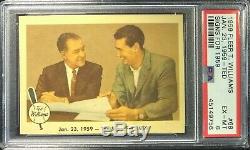 A PSA graded EX-MT 6 1959 Fleer short-print #68 card featuring Hall of Famer Ted Williams of the Boston Red Sox along with Red Sox GM and fellow Hall of Famer Bucky Harris, entitled Jan. 23, 1959 Ted Signs for 1959. Shortly after the set was released, Ted Williams decided to retire and this particular card was pulled from production.

As a result, the cards are very scarce compared to the others in the 1959 Fleer Ted Williams issue making it the key card in the set. This example has no creasing, bold printing, nice focus and good registration. The corners are consistent with those found on most NM/NM+ examples. There is some light toning on the borders and a tiny amount of printer's ink residue below the Jan. 23 date near the bottom edge, but the card still displays very well.

With slightly better T/B centering, this card would be a strong candidate for a PSA 6.5 or maybe even a PSA 7 holder. On the back of the card there is a small discoloration in the cardboard near the center of the card just above the word "Boston" in the 5th line of the text.

Otherwise, the back is clean with bold printing. Even with the minor flaws, this is a nice looking example of a very difficult to find card from this set. This card would be a great addition to any collection! The item "PSA 6 1959 Fleer Ted Williams #68 SP Ted Signs for 1959 Boston Red Sox HOF" is in sale since Tuesday, April 14, 2020.

This item is in the category "Sports Mem, Cards & Fan Shop\Sports Trading Cards\Baseball Cards". The seller is "stevens_creek_sports_cards" and is located in San Jose, California. This item can be shipped to United States, Canada.